Iran will give crushing response to any aggressor: Defense Minister

Tehran, 18 May_Iran’s Defense Minister says the Islamic Republic will give a crushing answer to any aggressor when it comes to defending its national security. 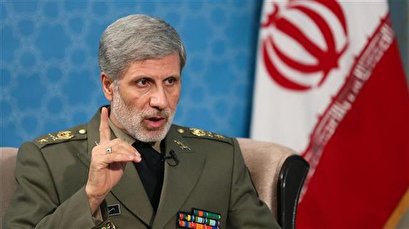 Speaking in a meeting with the Iranian Parliament’s Commission on National Security and Foreign Policy on Monday, Brigadier General Amir Hatami made a reference to Iran’s missile attack on Ain al-Assad military base in Iraq, which houses US forces, after the American military assassinated Iran’s top general, Qassem Soleimani, and his companions earlier this year.

Lieutenant General Soleimani, who headed the Islamic Revolution Guards Corps’ Quds Force, was martyred alongside fellow Iraqi commander, Abu Mahdi al-Muhandis, deputy head of Iraq’s Popular Mobilization Units (PMU), known as Hashed al-Sha’abi in Arabic, and some others in a terrorist drone strike that targeted their vehicle at the Baghdad International Airport on January 3.

Soon after General Soleimani’s assassination, Leader of the Islamic Revolution Ayatollah Seyyed Ali Khamenei said Washington was to face a “harsh revenge” for the atrocity.

On January 8, the Islamic Revolution Guards Corps (IRGC) unleashed volleys of ballistic missiles at the airbase of Ain al-Assad in Anbar Province. The Leader later described the retaliatory strikes as “only a slap.”