Tehran, 18 May_Senior diplomats from Iran, Pakistan, China and Russia have thrown their weight behind a power-sharing deal in Afghanistan signed between leaders of the country's two main political factions, expressing hope that the important step would speed up intra-Afghan talks. 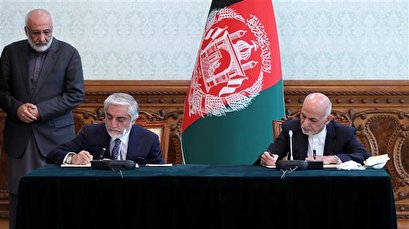 Special representatives of Iran, Pakistan, China and Russia for Afghanistan affairs held a virtual meeting on Monday, during which they discussed the latest developments and the process of peace and reconciliation in the war-ravaged country.

In a statement, they expressed their support for the peace process in Afghanistan led by the country's officials and emphasized that inclusive intra-Afghan talks would be the only way to ensure national reconciliation and end long-lasting conflicts.

The four countries' diplomats called on all groups and parties in Afghanistan to prepare the ground for immediate opening of dialog among Afghans.

It is expected that the peace and reconciliation process would pave the way for the return of Afghan refugees to their homeland, the statement read.

It also called on the international community to support a timely and respectful repatriation of Afghan refugees.

The four countries' statement came a day after Afghan President Ashraf Ghani and Abdullah Abdullah, a former official and a rival to the incumbent president, signed a power-sharing deal in a bid to put an end to a months-long feud that plunged the country into a political crisis.