Rocket hits area near US embassy in Baghdad’s Green Zone

Tehran, 19 May_A rocket has hit an area near the US embassy in Baghdad’s Green Zone, security sources say. 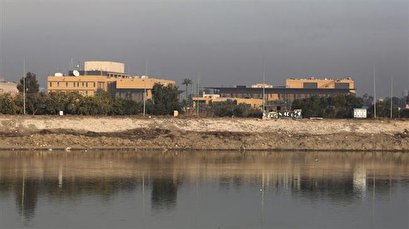 The rocket that hit the Green Zone early Tuesday was the first to land in the high-security area in weeks.

The sound of explosion could be heard across the Iraqi capital and triggered security sirens at the US embassy compound but did not cause casualties, the sources confirmed to AFP.

There was no immediate claim of responsibility.

The rocket attack follows more than two dozen similar attacks against American interests in Iraq since October. The volleys of rockets have so far killed US, British and Iraqi armed personnel.

Nearly 5,200 US troops still remain in Iraq while the Iraqi parliament voted in January to expel all American forces from the terror-ravaged country.

Baghdad and Washington are to hold negotiations in June to set a framework for the presence of US troops in the Arab country.

The American embassy in Baghdad -- the world's largest -- lies within the fortified neighborhood, also known as the International Zone, surrounded by concrete walls.

The Green Zone is home to several Western embassies and government offices including the parliament, the prime minister's office, and the presidency.