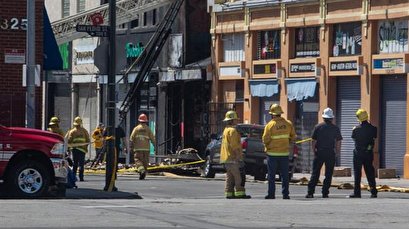 Downtown was rocked Saturday night by the blast, which broke out in an older business district off East 3rd Street, known for its various smoke shops. Authorities referred to it as Bong Row.

“We are in the early stages of an investigation. We are looking at every aspect at this stage. We haven’t determined a cause,” Los Angeles Police Department Assistant Chief Horace Frank said. “The explosion was massive and those firefighters are very lucky to be alive.”

An initial investigation identified the business that caught fire as Smoke Tokes, a warehouse distributor with supplies for butane hash oil, said Capt. Erik Scott, a spokesman for the Los Angeles Fire Department.

Authorities said carbon dioxide and butane canisters were found inside the building, and investigators are trying to determine whether oil stores on site might have sparked the blast. The cause of the fire has not been determined.

The owner of Smoke Tokes could not be reached for comment.

The explosion damaged several storefronts, melted fire helmets and left one firetruck burned and covered in debris. Officials said firefighters had to pass through a fireball to escape.

“Firefighters were coming out with obvious damage and burns,” Scott said. They ran “straight through that ball of flame to get to safety across the street.”

Eleven firefighters received treatment for burn injuries at Los Angeles County-USC Medical Center, according to the LAFD. A 12th firefighter was treated and released at an emergency room Saturday night for “a minor extremity injury,” said Nicholas Prange, an LAFD spokesman.