US sanctions against Syria amid pandemic amount to medical terrorism: Ambassador

Tehran, 19 May_Syria’s Ambassador to Russia Riad Haddad has condemned as “medical terrorism” the US sanctions against Damascus that hamper medical supplies amid the country’s battle against the novel coronavirus pandemic. 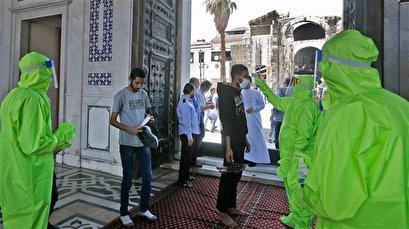 “The United States’ sanctions against Syria are actions running counter to international law. It happens at a time when all the nations have mobilized to combat the coronavirus infection. So, such actions are inhumane,” he told a virtual conference on Monday.

“Syria needs medicines and medical goods besides other means to combat the virus. Being deprived of such assistance, we see a new type of terrorism — medical terrorism — against people because the lack of medicines causes human deaths,” he added.

The diplomat then called on the World Health Organization (WHO) to denounce Washington’s economic restrictions.

The Syrian Health Ministry said in a statement on Sunday that seven new COVID-19 cases had been registered in the war-ravaged country, bringing the overall number of cases to 58.

The ministry added that the new cases were diagnosed in people who had recently returned to Syria from Kuwait.

Syria has so far recorded 36 recoveries and three deaths from COVID-19, according to the statement.

Syria has blamed Western sanctions for its struggling economy.

Earlier this month, Syria’s Ambassador to the United Nations Bashar al-Jaafari also said the unilateral sanctions imposed by the Western countries are hindering Damascus’ efforts to import medicine and other medical supplies to fight the deadly coronavirus outbreak.