Tehran May, 21_Senior religious and political figures in the Arab world slam Israel’s occupation of Palestinian lands and support the struggle of the people of Palestine to liberate their lands. 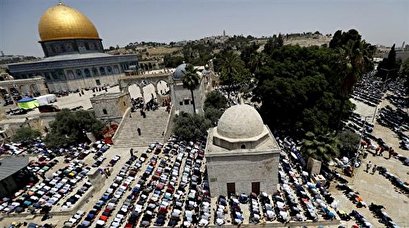 A senior leader of the Palestinian Hamas resistance movement warned the Tel Aviv regime of serious negative repercussions in case Israeli officials commit an act of folly against the sacred al-Aqsa Mosque in the occupied Old City of Jerusalem al-Quds.

“The Palestinian nation and the people of al-Quds (Jerusalem) are defending their faith in the al-Aqsa Mosque and the Holy City. We warn the Zionists against committing any stupid move concerning al-Aqsa Mosque,” Ismail Haniyeh, Hamas Political Bureau Chief, said during a speech he delivered via video link on Wednesday ahead of the International Quds Day, which falls on May 22 this year.

The International Quds Day is a legacy of the late founder of the Islamic Republic, Imam Khomeini, who designated the day in solidarity with Palestinians.

Since the 1979 Islamic Revolution in Iran, the event has been held worldwide on the last Friday of the Muslim fasting month of Ramadan.

Hanyieh then called for a comprehensive measure in the face of the controversial plan laid out by US President Donald Trump on the decades-old Israeli-Palestinian conflict, dubbed ‘deal of century.’

The top Hamas leader underlined that Trump’s proposed plan is based on the liquidation of the Palestinian cause, Jerusalem al-Quds in particular, and seeks to abolish the Palestinian right of return.

Haniyeh further highlighted that Jerusalem al-Quds is now suffering one of its most dangerous stages.