Tehran May, 21_Iran has criticized US President Donald Trump’s ultimatum to the World Health Organization (WHO) over COVID-19 handling amid the global battle against the deadly coronavirus pandemic. 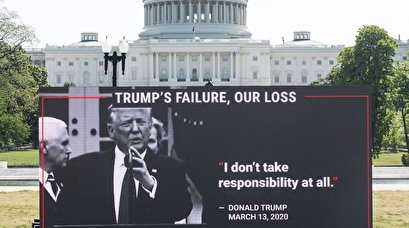 “As global health is at stake & we need global solidarity & science-led leadership more than ever, Trump's letter to @WHO Director-General is undermining the professionalism & independence of the Organization. It is a vain attempt at the wrong time,” Iranian Foreign Ministry Spokesman Abbas Mousavi said in a post on his official Twitter page on Wednesday.

The remarks came after Trump threatened to permanently stop funding the WHO and withdraw from the UN agency unless it makes "major substantive improvements within the next 30 days,” without detailing the improvements.

In a four-page letter to the WHO head, Tedros Adhanom Ghebreyesus, Trump announced late on Monday night that he will make his "temporary freeze" of US funding permanent after criticizing WHO's response to the pandemic.

He also said that the WHO also risked losing the US membership after the 30-day deadline.

Earlier on Monday, Trump also called the WHO a “puppet of China.”