Tehran, 24 May_The Iranian health ministry announced on Saturday that 1,869 new cases of coronavirus infection have been identified in the country in the past 24 hours, expressing pleasure that there have been no deaths in 14 provinces. 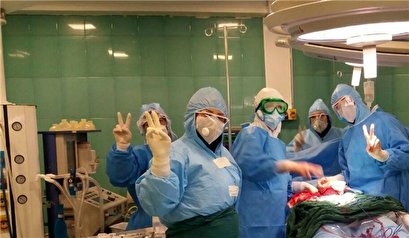 “1,869 more patients infected with COVID-19 virus have been identified in the country since yesterday based on confirmed diagnosis criteria,” Health Ministry Spokesman Kianoush Jahanpour said on Saturday.

He continued that 386 of these cases have been hospitalized while 483 were outpatients.

Jahanpour added that the number of Covid-19 patients in the country reached 133,521 people.

He expressed regret that for the past 24 hours, 59 patients have lost their lives increasing the total number of the dead to 7,359 people.

The spokesman also said that 104,072 patients have been recovered and discharged from hospitals, expressing concern that 2,633 patients infected with COVID-19 are in critical conditions.

Jahanpour concluded that Khuzestan province is still in red conditions, while 14 provinces have had no death reports and 6 provinces had just one dead each.

Iranian Health Minister Saeed Namaki stressed on April 7 effective measures to control coronavirus epidemic, expressing the hope that the disease would be controlled in Iran by late May.

“At present, the country is in the phase of disease management and we should not imagine that we have reached the harness and control phase. Today is the time for full-fledged combat against the virus. God willing, we will control coronavirus by late May. The virus should be controlled in the minimum possible time,” Namaki said, addressing the Iranian legislators in an open session of the parliament in Tehran.

He noted that at least 30% to 50% of hospital beds are still vacant across Iran and nearly 15,000 beds are ready to keep the patients who are recovering from coronavirus disease.

“We have now moved down to tank 6th in terms of deaths,” Namaki said, adding that the country’s situation in treatment of patients will improve in the next few days.

The coronavirus COVID-19 is affecting approximately all countries and territories around the world. The virus was first reported in the central Chinese city of Wuhan late last year. It has so far killed more than 340,000 people and infected over 5.3 million others globally.

The Iranian foreign ministry declared that despite Washington’s claims of cooperation to transfer drugs to Iran via the new Swiss-launched payment mechanism, the US is troubling the process amid the coronavirus outbreak in the country.

Although US claims that medicines and medical equipment are not under sanctions, they have practically blocked the transfer of Iran’s financial resources in other countries into the Swiss Humanitarian Trade Arrangement (SHTA), Iranian Foreign Ministry Spokesman Seyed Abbas Mousavi said.

As the death toll from the virus surges, Iran intensifies its preventive safety measures. Closures of schools and most universities have been extended until further notice.

The government also imposed travel restrictions, specially on Iran’s North, which is among the red zones. The country has also adopted strict digital health control procedures at airports to spot possible infections.

Namaki announced last month that a new national mobilization plan would be implemented across the country to fight against the coronavirus epidemic and more effectively treat patients.