Tehran, 26 May_The number of known coronavirus cases across the world has risen to 5,410,439, while 345,105 have lost their lives to the disease (COVID-19), according to data compiled by Johns Hopkins University, about five months after the deadly virus emerged in China and quickly moved to plague other countries. 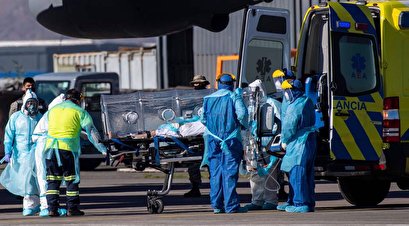 Many countries have reported a fall in the number of infections, relaxing the lockdown restrictions they imposed on their cities to contain the fast-spreading virus.

The easing of the social-distancing measures have led to a commuter surge in big cities. Meanwhile, changing recommendations from scientists and health authorities on subjects such as whether it is necessary to wear face masks has confused the public, prompting many to refuse wearing masks in public.

The situation has sparked concerns among health experts that such a situation could hinder global efforts to slow down the spread.

The following are the latest on the coronavirus pandemic around the globe:

Australia has deployed hundreds of crowd control staff to its most populous state, New South Wales (NSW), to enforce social-distancing guidelines on public transport, as schools and businesses reopened there.

In NSW, which includes the city of Sydney, children returned to schools on Monday and many were allowed to return to offices.

Australia has reported over 7,100 cases of the viral infection, including 102 deaths, well below figures reported by other developed countries.

Health officials have recently been reporting fewer than 20 new cases on a daily basis.

Japan to lift state of emergency for Tokyo

Japan is set to lift a state of emergency for the capital Tokyo and other remaining areas.

Japan’s economy minister told reporters on Monday that the government had received approval from key advisers to remove the state of emergency for all remaining regions.

“While the emergency state will be lifted, it is important to expand economic activity in stages as we establish a new way of living,” Yasutoshi Nishimura said.

Theaters, cinemas and other venues would reopen at a later stage, she added

Meanwhile, the Japanese government is considering a plan to allocate $930 billion in fresh stimulus to help the country’s stricken economy and get the firms through the pandemic.

Japan has recorded 16,580 COVID-19 cases and 830 deaths, according to the Health Ministry data.