Trump pushes for packed arena for Republican convention as US virus deaths near 100,000

Tehran, 26 May_US President Donald Trump has threatened to move the Republican party’s national convention from Charlotte, North Carolina, if the state is unable to commit to “full attendance” at the gathering due to the coronavirus social distancing restrictions. 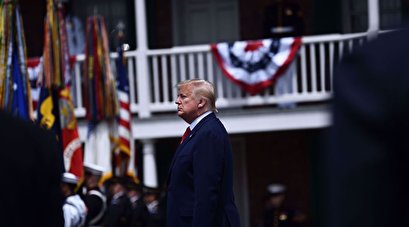 Trump said the state’s Democratic governor, Roy Cooper, was “still in Shutdown mood & unable to guarantee” that the party would be able to fill the arena with supporters.

The US president tweeted that, “We would be spending millions of dollars building the Arena to a very high standard without even knowing if the Democratic Governor would allow the Republican Party to fully occupy the space.”

Trump’s push for full attendance comes as the coronavirus death toll in the US nears 100,000.

The number of coronavirus-related deaths reached 98,218 in the US as of Monday evening, more than the number of American forces killed in the Korean and Vietnam wars combined.

US Vice President Mike Pence echoed Trump’s threat, saying the convention could be moved due to the pace of the state’s reopening process. He mentioned Texas, Georgia and Florida as three states that have reopened more quickly.

In a statement posted to Cooper’s Twitter account after Trump’s threat, Cooper’s press secretary Dory MacMillan, said, “North Carolina’s health officials are working with the Republican National Committee (RNC) and will review its plans as they make decisions about how to hold the convention in Charlotte. North Carolina is relying on data and science to protect our state’s public health and safety.”

On 15 May, Trump had threatened Cooper saying it would be “bad for them” if the state delayed the convention, scheduled for 24-27 August. The Republican convention, which had planned to bring 50,000 people to the city, is the centerpiece of Trump’s re-election campaign.

North Carolina is currently in phase two of its coronavirus reopening plan and gatherings are limited to 10 people indoors or 25 outdoors, The Guardian said.

The Republican National Committee chair Ronna McDaniel has said that the convention would be held at least partly in person and vowed not to hold “a virtual convention”.

US senator Thom Tillis, a North Carolina Republican stressed that, “There will be a convention in Charlotte. It’s a matter of what it looks like.”

But Cal Cunningham, the Democratic nominee for the Senate seat, said “we’re certainly not ready to have large gatherings in North Carolina at this point. We can be hopeful that this virus will burn out and disappear before it’s convention time.”