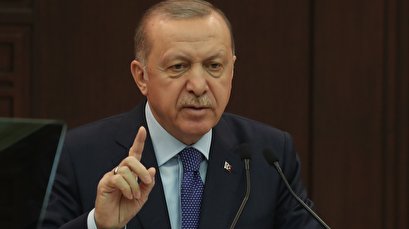 Erdogan -- in a video message on Twitter addressed to US Muslims on the occasion of Eid al-Fitr marking the end of the holy month of Ramadan on Sunday -- said, "We will not allow the Palestinian lands to be offered to anyone else."

"I would like to reiterate that al-Quds al-Sharif, the holy site of three religions and our first Qiblah, is a red line for all Muslims worldwide," he added, referring to the al-Aqsa Mosque in Jerusalem al-Quds.

"Last week we witnessed that a new occupation and annexation project, which disregards Palestine’s sovereignty and international law, was put into action by Israel."

The Israeli regime’s plans to annex parts of the occupied West Bank and the Jordan Valley, which had been envisaged in US President Donald Trump’s so-called "deal of the century", were unveiled earlier this year.

Israeli prime minister Benjamin Netanyahu announced that he would start plans for annexing more areas in the occupied West Bank on July 1, in accordance with Trump’s scheme, further infuriating Palestinians.

The American president officially unveiled his scheme in January at the White House with Netanyahu on his side, while Palestinian representatives were not invited.

The proposal gives in to Israel’s demands while creating a Palestinian state with limited control over its own security and borders, enshrining the occupied Jerusalem al-Quds as “Israel’s undivided capital” and allowing the regime to annex settlements in the West Bank and the Jordan Valley.