Tehran, 26 May_San Francisco is joining other US cities in authorizing homeless tent encampments in response to the coronavirus pandemic, a move officials have long resisted but are now reluctantly embracing to safeguard homeless people. 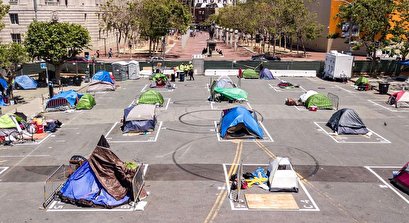 About 80 tents are now neatly spaced out on a wide street near San Francisco City Hall as part of a "safe sleeping village" opened last week. The area between the city's central library and its Asian Art Museum is fenced off to outsiders, monitored around the clock and provides meals, showers, clean water and trash pickup.

In announcing the encampment, and a second one to open in the famed Haight-Ashbury neighborhood, San Francisco's mayor acknowledged that she didn't want to approve tents, but having unregulated tents mushroom on sidewalks was neither safe nor fair.

"So while in normal times I would say that we should focus on bringing people inside and not sanctioning tent encampments, we frankly do not have many other options right now," she said in a tweet last week.

Nicholas Woodward, 37, is camping at the safe sleeping site, but he said he preferred sleeping in his tent before the city stepped in; he finds the fencing belittling and the rules too controlling. His friend, Nathan Rice, 32, said he'd much rather have a hotel room than a tent on a sidewalk, even if the city is providing clean water and food.

"I hear it on the news, hear it from people here that they're going to be getting us hotel rooms," he said. "That's what we want, you know, to be safe inside."

San Francisco has moved 1,300 homeless people into hotel rooms and RVs as part of a statewide program to shelter vulnerable people but the mayor has been criticized for moving too slowly. She has said she is not inclined to move all the city's estimated 8,000 homeless into hotels, despite complaints from advocates who say overcrowded tents are a public health disaster.