TEHRAN, 29 May_Protesters in the US state of Minnesota set on fire a police station in the city of Minneapolis on Thursday in a third straight night of mass protests to express their fury over the death of George Floyd, a black man who died after a white police officer knelt on his neck while he was handcuffed. 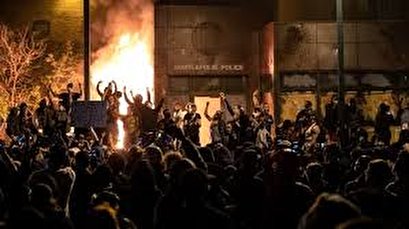 More than 500 Guard members were activated and sent to Minneapolis and several surrounding cities. It was the first time the Minnesota National Guard has been activated for a civil disturbance in 34 years.

Four city police officers involved in Floyd’s death, including the one shown pressing his knee into Floyd’s neck as he lay on the ground, moaning, “please, I can’t breathe,” were fired from their jobs the next day.

However, prosecutors have not announced charges, asking the people of Minneapolis for patience instead.

Several buildings in Minneapolis were set on fire. The blazes included one at the Third Police Precinct station, the epicenter of the three nights of demonstrations, after crowds of protesters broke in and set fires inside and behind the building.

Fires burned on both sides of the police station as demonstrators pushed down temporary fencing and occupied property at the precinct. Officers fired tear gas from the ground and a rooftop.

Floyd’s brutal killing is reminiscent of the killing of African-American Eric Garner, who died after being held in a chokehold by a white police officer in New York City in 2014.

Garner’s dying words of “I can’t breathe” became a rallying cry for the Black Lives Matter movement that formed amid a wave of killings of African-Americans by police.

Police-involved shootings and killings of unarmed black men in the hands of white police officers have led to mass protests across the US in recent years and the formation of the Black Lives Matter movement.