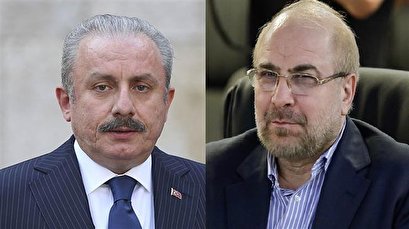 In a phone call with Turkey’s Parliament Speaker Mustafa Sentop on Friday, Qalibaf stressed the importance of reinforcing unity and solidarity among Muslim nations to thwart the Israeli regime’s plots.

He pointed to commonalities between the two countries and said Iran and Turkey have always enjoyed “friendly relations at the highest level.”

Qalibaf said the Iranian Parliament was ready to take any measure to expand mutual relations, particularly in the economic sector. A Parliamentary friendship group would be set up in the near future, he added.

Iranian lawmakers on Thursday overwhelmingly voted to elect the former Tehran Mayor as Speaker of the newly-inaugurated Parliament (Majlis).