TEHRAN, 29 May_Police arrested a CNN crew broadcasting live from the US city of Minneapolis early on Friday while covering unrest sparked by the death of a black man at the hands of law enforcement. 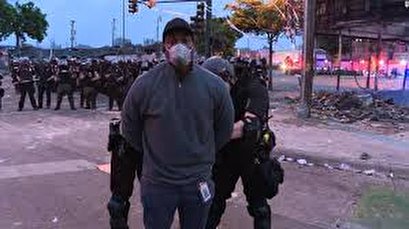 The network posted footage of correspondent Omar Jimenez speaking calmly to police with batons and riot helmets, then being handcuffed and taken away.

No answer was audible.

CNN said a producer and a camera operator working with Jimenez were also arrested.

Earlier, as Minnesota state police surrounded Jimenez while he reported, the correspondent spoke to the officers and said he wanted to cooperate.

"Wherever you want us, we would go," said Jimenez, who is black. CNN said in a tweet that a white reporter who was also on the ground covering the unrest was not arrested.

Jimenez was back on the air later Friday after police released him. CNN said Minnesota Governor Tim Walz apologized to the network.