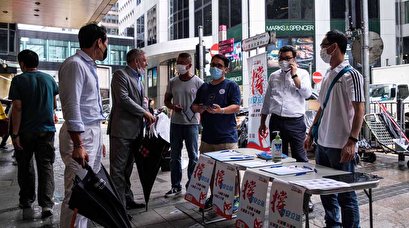 China’s parliament on Thursday approved a new bill on national security that is expected to criminalize sedition, secession, and subversion against the mainland. It would also pave the way for Chinese national security institutions to operate in Hong Kong for the first time since 1997, when Hong Kong returned from British to Chinese rule.

China has previously rejected attempts by the United States to have the UN Security Council hold a meeting over the law, but the US and Britain succeeded in securing an informal discussion about it on Friday, diplomatic sources told AFP.

Speaking at a regular press briefing on Friday, China’s Foreign Ministry spokesman Zhao Lijian censured the US approach as “totally unreasonable,” stressing that China would not allow the US to “kidnap the Council for its own purposes.”

“We urge the US to immediately stop this senseless political manipulation,” he said.

The US, Britain, Canada, and Australia led criticism of the new law on Friday, saying in a joint statement that it “lies in direct conflict” with China’s international obligations to guarantee certain freedoms in Hong Kong.

They argued that the law would undermine the “one country, two systems” framework, according to which Hong Kong has been governed since the city — a former British colony — was returned to China in 1997.

Zhao slammed the joint statement, saying that the decision by the National People’s Congress of China “is entirely within China’s internal affairs and no other country has the right to interfere with [it].”

“These countries made arrogant comments and groundless accusations, which have brutally interfered with Hong Kong’s affairs and China’s internal affairs,” he said, adding that China had filed official protests with the four countries.