TEHRAN, 31 May_Syria has received a second batch of advanced MiG-29 fighter jets from Russia as Damascus and its allies are fighting a remaining Daesh pocket in the Arab country. 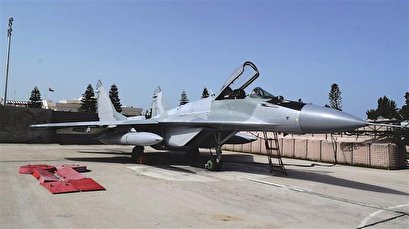 Syria's official news agency SANA, citing a military source, said the new fighter jets were handed over to the Syrian Army during a ceremony at Hmeimim airbase in Syria's western coastal province of Latakia on Saturday.

"In the framework of military and technical cooperation between Russia and Syria, the Russian side handed over the second batch of advanced and modernized MiG-29 fighter jets to Syria, during a ceremony at Hmeimim base,” the source said.

“The warplanes flew from the Hmeimim Airbase to their deployment areas in Syrian airbases,” the source said.

According to the source, the newly-received fighter jets are "more effective" than their previous generation.

“As of June 1, 2020, Syrian pilots will begin to carry out missions on those planes in Syrian airspace,” the source said.

Syrian government forces, backed by allied fighters from popular defense groups, continue to score territorial gains in their battle against foreign-sponsored Takfiri militants in the northwestern province of Idlib.

Idlib is the only large territory in the hands of terrorists after the Syrian Army managed to undo militant gains across the Arab country.

Russian troops were formally invited to the country by the Syrian government in 2015.