Arrogant US used to lecturing others: Iran's Mousavi 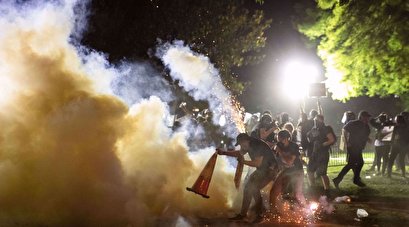 “You're so used to lecturing others,” Mousavi tweeted on Sunday.

The tweet was a response to an earlier one by a member of the Atlantic Council, a Washington-based international affairs think tank, against Foreign Minister Mohammad Javad Zarif.

Barbara Slavin had taken on Zarif for critiquing those within the United States and elsewhere, who “don't think black lives matter.”

Zarif’s tweet had also incorporated a 2018 US State Department statement addressing rioting in Iran that was later found out to have been provoked by foreign, including American, services with subversive intentions. The Iranian foreign minister had ironically crossed out all references to Iran in that statement and replaced them with references to the United States to apparently indicate that Washington’s criticism of others has to be directed against itself instead.

However, Washington’s deep-seated habit of just telling others what to do and not tolerating criticism has made it feel “awkward to be reminded that YOU ‘should not be so arrogant as to tell Iran,’” Mousavi noted.

The exchanges came amid angry protests across the United States that have been prompted by a white police officer’s recent choking to death of African American citizen George Floyd.