Tehran, 01 June_Iran's foreign minister has rebuked the United States for its brutality against African Americans, urging the entire world to wage a war against racism. 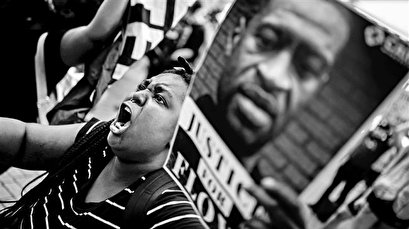 "Some don't think 'Black Lives Matter'," Mohammad Javad Zarif tweeted on Saturday, referring to an international activist movement, originating in the African-American community, that campaigns against violence and systemic racism towards black people.

"To those of us who do: it is long overdue for the entire world to wage war against racism," he added.

"Time for a World Against Racism," Zarif noted, apparently alluding to the earlier "World Against Violence Extremism (WAVE)" proposal by Iranian President Hassan Rouhani, which was unanimously approved by the UN General Assembly in December 2013.

In his tweet, the Iranian foreign minister also posted an image of a revised version of his American counterpart's 2018 statement on Iran protests, changing a few words in Mike Pompeo's remarks to turn it into Iran's statement on the US protests.

Earlier in the day, the Iranian Foreign Ministry strongly denounced rampant bloodshed of African-Americans in the United States and the country’s suppression of the protests that have followed the recent grisly murder of a black man by a white police officer in Minneapolis.

“Iran regrets the tragic murder of black Americans, denounces deadly racial profiling in the United States & urges authorities to do justice for every case,” the ministry said in a tweet on Friday.