Tehran, 02 June_New York's mayor Bill de Blasio on Monday declared a city curfew from 11:00 pm to 5:00 am, as anti-racism protests grip the United States with regular outbreaks of violence and looting. 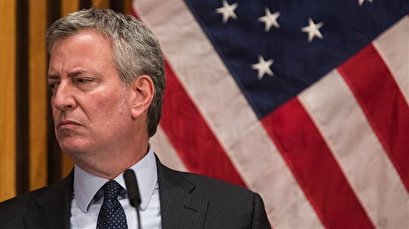 Saying that "we support peaceful protest," De Blasio said he made the decision in consultation with the state's governor Andrew Cuomo, following the lead of many large US cities.

In a joint statement the mayor and governor said the city would double its police presence "to help prevent violence and property damage," especially in commercial areas including lower Manhattan that saw broken storefronts and looting overnight.

"We can't let violence undermine the message of this moment. It is too important and the message must be heard," said de Blasio.

Speaking on MSNBC shortly after the announcement, Governor Cuomo voiced concern that the protests drawing thousands could spread COVID-19, as a pandemic that once saw New York as its epicenter continues to flare worldwide.

Saying he stands "behind the protestors and their message," Cuomo said in the statement that "the violence and the looting that has gone on in New York City has been bad for the city, the state and this entire national movement, undermining and distracting from this righteous cause."

National unrest was triggered last week after the killing of an unarmed black man in Minneapolis that saw a policeman kneel on the neck of George Floyd for nine minutes, after arresting him for allegedly purchasing cigarettes with a counterfeit bill.

Demonstrations have erupted coast-to-coast and turned violent at times.

An internal investigation is underway after a video clip showed a New York City police truck ram into a crowd of protestors over the weekend.

On Monday afternoon about 1,000 people gathered at Times Square for a demonstration that remained peaceful as police in riot gear looked on.