China says US ‘addicted to quitting’ over plan to leave WHO

Tehran, 03 June_China has criticized the United States for its decision to sever ties with the World Health Organization (WHO), accusing Washington of pursuing a “selfish” and unilateralist policy. 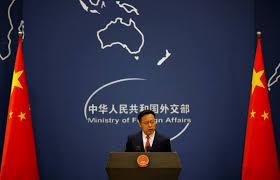 Zhao further said the response from the international community has shown that many disagree with the US withdrawal from the WHO.

"The international community generally disagrees with such US acts of selfishness, evasion of responsibility, and undermining of international cooperation against the epidemic," Zhao said.

Since US President Donald Trump took office in 2017, the US has quit the UN cultural agency UNESCO, cut the UN funding and announced its withdrawal from the UN-backed Paris climate agreement and the Iran nuclear deal.

On Friday, Trump announced that he was cutting the US relations with the WHO, accusing the Geneva-based organization of failing to do enough to rein in the initial spread of the new coronavirus.

The president first suspended funding to the UN agency last month over accusations of mishandling the global pandemic.