Tehran, 03 June_Journalists reporting on nationwide protests over the death of black man George Floyd in police custody have increasingly been targeted by US law enforcement. 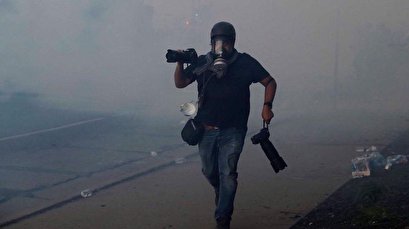 Video footage widely shared on social media show Floyd, 46, being pinned down to the ground by Derek Chauvin who held a knee over his neck for several minutes.

Chauvin was arrested Friday and charged with third-degree murder. But the arrest failed to quell the angry protests that have now spread to at least 30 cities.

Molly Hennessy-Fiske, a Los Angeles Times journalist, said Minnesota state patrol “fired teargas canisters on us at point-blank range” as she and a group of other journalists were reporting outside the fifth police precinct in Minneapolis.

Hennesy-Fiske said the group had clearly identified themselves as reporters and asked the officers for instructions.

“They did not tell us where to go. They didn’t direct us. They just fired on us,” she said in a video shared on Twitter.

The incident took place a day after an African-American journalist with the CNN was arrested and handcuffed by police in Minneapolis as he was broadcasting live on air.

The journalist, Omar Jimenez, was released an hour later after Minnesota Governor Tim Waltz personally apologized for the incident.