Protesters across Europe defy pandemic ban to condemn US racism

Tehran, 04 June_Thousands of people across Europe have held protest rallies to condemn racism and police brutality in the US, amid a chorus of growing global outrage at the police killing of African American citizen George Floyd on May 25. 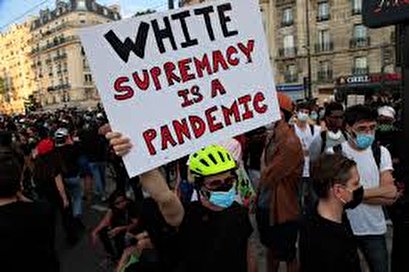 Protests over Floyd’s death, which began in the US city of Minneapolis, have spread to hundreds of cities across the US and the world.

On Wednesday, large protests erupted in several European cities, where people defied the coronavirus pandemic bans to express solidarity with anti-racism protests in the US.

In London, there have been a series of marches and demonstrations. Tens of thousands of people chanting “no justice, no peace, no racist police” marched through central London to express their protest.

In London’s Parliament Square, thousands knelt on one knee, a form of protest known as “taking a knee” famously used by American footballer Colin Kaepernick to denounce police brutality against black people.

The London march started in Hyde Park before winding its way to Parliament Square. Many of the protesters chanted “George Floyd” and “Black lives matter”.

More rallies are planned for the weekend. The Stand Up to Racism campaign has asked UK citizens to “take a knee for George Floyd” outside their front doors.

In Rotterdam, the Netherlands, thousands of anti-racism activists held a peaceful protest; however, the Dutch police told them to go home as the rally was too crowded and participants could not keep to social distancing rules.

In Stockholm, Sweden, thousands of people defied the ban on public gatherings of more than 50 people and poured into streets to protest the US police brutality against black people.