Tehran, 04 June_The Iranian administration has renewed allegiance to the ideals of the late founder of the Islamic Republic Imam Khomeini as the nation prepares for 10 days of celebrations to commemorate the 1979 Islamic Revolution. 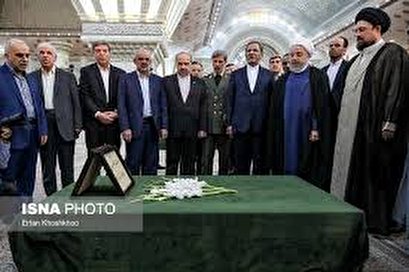 On Monday, President Rouhani and members of his cabinet visited Imam Khomeni’s Mausoleum in southern Tehran, where they laid wreaths to pay tribute to the late icon and his venerable cause.

They were joined by Imam Khomeni’s grandson Seyyed Hassan Khomeini, who is the custodian of the mausoleum.

During the visit, President Rouhani said “the late Imam’s discourse means pursuing and advancing the great causes of the Islamic Revolution such as freedom and independence.”

“We neither worship foreigners, nor are we xenophobes. We are Muslims, revolutionaries, and Iranians, and will employ constructive interaction with the world to the benefit of our people and national interests,” he added.

Tuesday marks the beginning of the 10-day-long period, known as the Ten Days of Dawn. The festivities will culminate in the celebration of the 38th anniversary of the victory of Islamic Revolution, which falls on February 12 this year.

Imam Khomeini’s untiring decades-long work in asserting the nation’s rights culminated in the Revolution, which was followed by the founding of the Islamic Republic on the back of a popular referendum.