Tehran, 04 June_The number of Americans filing for unemployment benefits dropped below 2 million last week for the first time since mid-March, but remains astonishingly high as companies adjust to an environment that has been significantly changed by COVID-19. 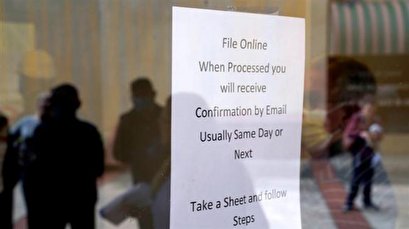 New claims for state unemployment benefits totaled a seasonally adjusted 1.877 million for the week ended May 30, down from 2.126 million the prior week, the Labor Department reported on Thursday. Economists polled by Reuters had forecast 1.8 million initial claims in the latest week.

New jobless claims have declined since hitting a record 6.867 million in late March. Despite the still elevated reading, the most recent data suggested the worst is over for the labor market, combined with data on Wednesday that showed a smaller-than-expected drop in private payrolls in May.

Surveys have also shown consumer confidence, manufacturing and services industries stabilizing albeit at low levels in May, indicating the downturn triggered by a near shutdown of the country in mid-March to control the spread of COVID-19 was bottoming. Many businesses had reopened by mid-May.

Economists said the stubbornly high number of unemployment claims comes from a second wave of layoffs as businesses navigate weak demand, as well as some lingering backlogs at state unemployment offices overwhelmed by the flood of applications early in the shutdown.

“Many of the new claims reflect current layoffs, as the corporate sector more broadly begins to adjust to the altered outlook for the year ahead,” said Lou Crandall, chief economist of Wrightson ICAP LLC in Jersey City, New Jersey. “Even as the economy begins to reopen, new job losses continue to pile up.”

Boeing (BA.N) and pipeline operator Energy Transfer (ET.N) have announced layoffs, while some big retailers like JC Penney and high-end chain Neiman Marcus have filed for bankruptcy. States and local governments, whose budgets have been decimated by the COVID-19 fight, are also cutting jobs.