Tehran, 07 June_On Saturday, about three thousand football ultras from across Italy gathered in Rome's Circus Maximus field to voice their discontent over the government's handling of the Covid-19 crisis. 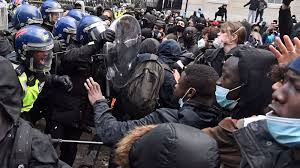 The initiative had been called by the far-right Serie A club Brescia ultras and joined by supporters with identical political views from a number of other Italian football clubs.

Brescia is a city located in the northern Lombardy region, by far the most affected by the coronavirus outbreak in Italy. The ultras have complained that the government should have not shut down most commercial activities to contain the spread of the pandemic.

The coronavirus crisis has further boosted right-wing thinking in Italian politics. Boundaries between parliamentary right-leaning parties such as the League and Brothers of Italy and neo-fascist groups such as Casapound and Forza Nuova are wearing thinner and thinner.

Some believe the aim of the ultras gathering in Rome is to form an across-the-board national front of extreme right affiliates that would soon start acting as a political movement. Neo-fascist group Forza Nuova also attended the demo.

Tension rose during the demonstration when protesters hurled slurs at journalists and police. Some of the ultras tried to chase journalists away with bottles and flares. A line of riot police moved in, sparking several minutes of tension before the ultras moved to the Circus Maximus field, near the stage. More scuffles broke out by the end of demo.