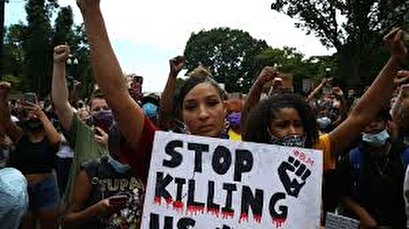 Protests on Saturday took place not only throughout the US but across the world in Japan, Germany, South Korea and Australia to name just a few. We were at the protest in London, which was the 5th black lives matter protest so far since the killing of African American, George Floyd, with many more planned in London and throughout the United Kingdom.

The murder of George Floyd seems to have resonated with many at the protest because it has the hallmarks of some the killings of black men and women here in the UK, at the hands of the British police.

Despite pleas from the British Home Secretary, Priti Patel and British Health Secretary Matt Hancock for Brits to stay at home and not to protest, the streets of Westminsiter were packed with those demanding a systematic change to way police forces in the US and the UK value the lives of black people.

For many this cause could no longer be sidelined and for them, fighting the virus of racial injustice outweighed the potential risks of Covid 19.