Tens of thousands turn out across US to protest police brutality

Tehran, 07 June_Tens of thousands of people in cities across the US have waged huge rallies to protest persisting police brutality, racial profiling and the latest brutal killing of an African American man in Minneapolis that sparked unprecedented protest events throughout the country in the past week. 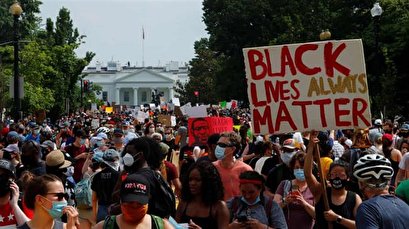 Massive crowds poured out into major US cities on Saturday as daily demonstrations against police brutality – including violent encounters between protesters and riot police as well as US national guard forces -- continued since the death of George Floyd on May 25, with the number of protesters reaching record levels in populous cities such as Washington DC, New York, Chicago, Los Angeles, Philadelphia, Boston and San Francisco.

The protests broke out across the country last week after a video footage of Floyd's killing went viral. It showed former officer Derek Chauvin kneeling on Floyd's neck for nearly nine minutes, remaining in the position even after the victim became unresponsive.

US police forces in different cities demonstrated their brutality during protest rallies in recent years by severe beating and arresting of protesters and even journalists, using tear gas and rubber bullets, helicopter crowd control tactics and other forceful measures.

This is while rally organizers and protesters across the US are also demanding sweeping reforms to address police brutality and racial inequity.

In Washington -- expected to be the scene of the largest protests over the weekend -- thousands gathered at numerous rallies across the city from the Lincoln Memorial, to Freedom Plaza, to Capitol Hill amid a heavy security presence, including members of the US National Guard.