Tehran, 17 June_As the impact of massive job losses from the coronavirus pandemic sweeps through the US economy, most black immigrant domestic workers in the country fear losing their homes or having utilities turned off in the coming months, according to new research. 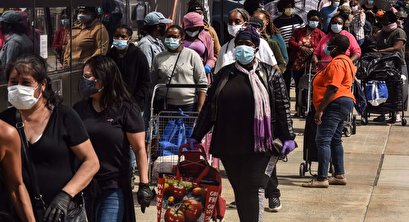 The survey, which was released Tuesday, was conducted by the Institute for Policy Studies, a think tank, and the National Domestic Worker’s Alliance (NDWA) advocacy group.

The survey found that nearly two-thirds of black immigrant domestic workers, who are mainly employed as cleaners, nannies and home carers, feared being evicted or having their utilities shut off for nonpayment of rent or bills in the next three months.

“We are using our savings,” Munoz, a mother of two young boys, said on a conference call hosted by the NDWA.

Approximately 2.2 million people are domestic workers in the United States, who are ineligible for unemployment assistance, according to the Economic Policy Institute (EPI) think tank.

The number of people in the US receiving jobless benefits was almost 21 million for the week ending May 30, the US Labor Department on Thursday.

The US unemployment rate was 13.3 percent, an astonishingly high figure as companies adjust to an environment that has been significantly changed by Covid-19. The unemployment rate for blacks was 16.8 percent.