The downing of a passenger jet in Ukraine is likely to be a turning point in the country's conflict. But which way it turns depends mainly on who carried out the attack and how convincingly it can be proved to the world.
With suspicion falling heavily on pro-Russian insurgents, the event could provide an opportunity for Russian President Vladimir Putin to disengage from his increasingly uncontrollable allies in eastern Ukraine.
But if enough doubt persists, positions could harden in both Russia and the West. The West could toughen its sanctions against Russia and help Ukraine's military, prompting Putin to dig in for an even higher-stakes battle. 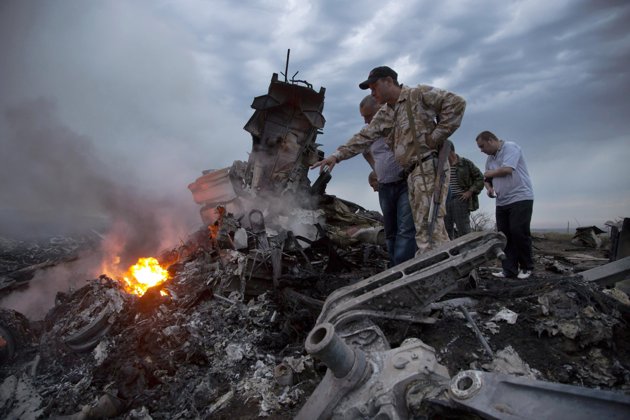 The disaster has already drawn the world closer into the Ukraine conflict, the worst crisis between Russia and the West in a generation.
It also made the fighting painfully real for families from Australia to Amsterdam whose relatives were on Malaysian Airlines Flight 17. And it revealed a danger that most people hadn't contemplated: rebels able to strike beyond their own homeland by pointing conventional weapons toward the skies.
WEAKENING THE INSURGENCY
Definitive proof that the insurgents are at fault could be a crucial step toward defusing the months-long conflict, discrediting them so badly that Russia's leadership distances itself from the rebels and their movement fizzles.
Even before the plane was downed, Putin faced competing pressures at home. Some in his administration were urging him to take a more forceful hand in supporting the rebels, while others urged him to step away.
If the rebels can be shown to have committed an act that horrified the world, the doves would likely see their position strengthened. But Putin-watchers caution that with the Russian president, you never really know.
Any change would probably be gradual, especially because Putin has always denied any direct role in supporting the rebels.
HARDENING THE INSURGENCY
It will be difficult, and perhaps impossible, to prove definitively who shot down the Boeing 777 and why. This is an unusually tough investigation in a region where no one is really in charge, propaganda trumps truth and every announcement seems to have an ulterior motive.
If enough doubt remains about who shot down the plane, Russia could plausibly continue to quietly support the rebels, especially as many Russians believe the Ukrainian government was responsible for the attack.
Of course, that would bring consequences for Russia. In Washington, some lawmakers are already pushing President Barack Obama to get tougher on Russia and crank up the sanctions. European leaders face similar calls.
The West might even increase its military aid to Ukraine. And it's anyone's guess where those hostilities might lead.
BAD PRECEDENTS
Few passenger airliners have ever been shot down — and when they are, it can cause lasting political damage.
A U.S. warship mistakenly shot down an Iranian jet in 1988 during the Iran-Iraq war, killing 290 people and prompting widespread anger at U.S. policy and years of legal dispute.
The downing of a Korean Airlines flight by Soviet forces in 1983 and the loss of 269 lives sparked one of the tensest moments of the Cold War and led to an escalation of anti-Soviet sentiment in the U.S. The man in charge of the Soviet Union at the time, Yuri Andropov, was a hero of Putin's.
FROZEN CONFLICT
Lingering uncertainty about Flight 17 could lead to yet another option: condemning eastern Ukraine to a frozen conflict, like others around Russia's edges.
It may take days or longer to know what Putin plans to do. A dragged-out, inconclusive investigation could leave things just as they are, serving Russia's interests by preserving economic ties between eastern Ukraine and Russia and effectively scotching any Ukrainian attempt to join NATO.
The world may never know what happened to Malaysian Airlines Flight 370, which disappeared over the Indian Ocean this year. And it's possible that the motive behind the downing of Flight 17 could remain a mystery as well.
Whether it does could well determine the future of Ukraine.
AP
Share to
Tags
Ukraine ، Russia ، Malaysia ، Jet
Your Comment