Space photos: The most amazing images this week!

Monday, 29 June_A ''ring of fire'' eclipse could be seen by humans on Earth and in space, the Hubble Space Telescope caught the sight of the flapping wings of a star nicknamed "Bat Shadow" and a NASA astronaut captured gorgeous cloud art from the International Space Station. These are some of the top photos this week from Space.com.

The Hubble Space Telescope spotted a bat signal out in the cosmos, 1,300 light-years from home. And the bat? It's flapping its wings. 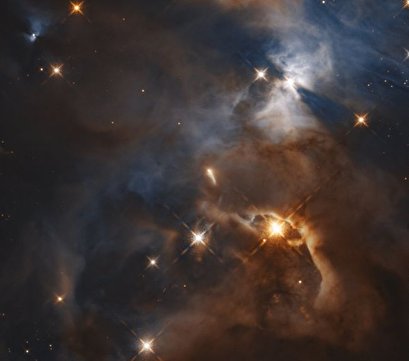 In new observations released Thursday (June 25), Hubble has captured the young star HBC 672, nicknamed Bat Shadow. The far-off star, which lies in the Serpens Nebula, got its moniker because it sports a wing-like shadowy feature, which happens to be so large, it stretches out about 200 times the diameter of our entire solar system. The star has a planet-forming disk surrounding it that casts this wing-shaped shadow across the cloudy star-forming region.

But, while the bat-like feature might seem subtle (and might even take you a few minutes to spot), with these new images it is more apparent as you can see the structure's "wings" "flapping." That's right, much to the surprise of the team observing the star, Bat Shadow "flaps." In a new study, researchers led by Klaus Pontoppidan, an astronomer at the Space Telescope Science Institute (STScI) in Baltimore, Maryland, observed the star using Hubble and noticed this shadow "flapping."

Pontoppidan and the other scientists think that this "flapping," which you can see in the video above, might be caused by a planet tugging on Bat Shadow and its surrounding disc and warping that disc. The researchers didn't expect to see the shadowy feature "flapping." But, as they observed Bat Shadow over 13 months, it looked like the shadow had moved.

"You have a star that is surrounded by a disc, and the disc is not like Saturn's rings — it's not flat. It's puffed up," Pontoppidan said in a statement. "And so that means that the light from the star, if it goes straight up, can continue straight up — it's not blocked by anything. But if it tries to go along the plane of the disk, it doesn't get out, and it casts a shadow."

Share to
Related News
As part of NASA’s plan: Nokia is to bring 4G to the moon
Tags
Hubble ، telescop ، photos
Your Comment