Tuesday, 30 June_Hundreds of people have staged a rally in Syria’s northeastern province of al-Hasakah to protest against US and Turkish military deployment to their areas, besides the new financial sanctions that Washington slapped on their country earlier this month. 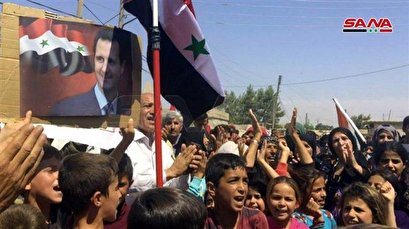 On Tuesday, local residents of Hamou village held up placards and chanted slogans in condemnation of hostile practices of American and Turkish troops, and denounced the so-called Caesar Syria Civilian Protection Act – also known as the Caesar Act, which entered into force on June 17.

The protesters called for a unified front in the face of the unfair economic blockade imposed by the US and its allies on Syria, and the potential impacts of Caesar Act sanctions.

The demonstrators noted that US coercive measures have affected Syrian people and vital sectors in the country, particularly the health sector, setting US flags ablaze.

In a separate development on Tuesday, US-sponsored and Kurdish-led militants from the so-called Syrian Democratic Forces (SDF) dismantled hundreds of meters of railroad in Syria’s eastern province of Dayr al-Zawr, and stole them to sell to Turkish scrap metal merchants.

The sources added that the US-backed terrorists have looted a number of stations in the area, stole their equipment and transferred them on board trucks to their strongholds.