Wednesday, 01 July_The US department of homeland security will use a special federal unit to protect monuments from protesters on July 4. 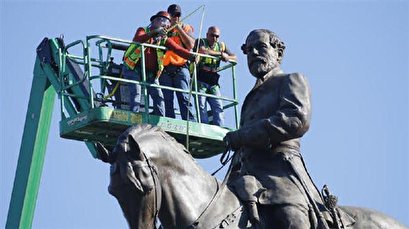 “The upcoming July 4th holiday weekend has the potential for increased disruptive activity at specific locations across the country that could threaten our personnel and the Federal facilities and property they protect,” a soon-to-be-released memo penned by acting DHS Secretary Chad Wolf, and obtained by Fox News, said Tuesday. “DHS will be forward leaning in preparing to protect federal facilities and property.”

Rapid Deployment Teams (RDTs) will be dispatched to Portland, Seattle and Washington DC.

US President Donald Trump signed an executive order, Friday to take on those vandalizing symbols of racism such as Confederate monuments by protesters outraged at the police killing of George Floyd.

The protesters have recently been trying to topple the statue of President Jackson in the Lafayette Square directly in front of the White House.

Trump and other right-wing officials have been critical of the way the protesters are destroying the oldest traces of racism and slavery in America.