Saturday, 11 July 2020_Lebanon protesters have rallied in the capital Beirut to condemn Washington’s intervention in the Arab country's domestic affairs after US Ambassador Dorothy Shea made comments against the Hezbollah resistance movement. 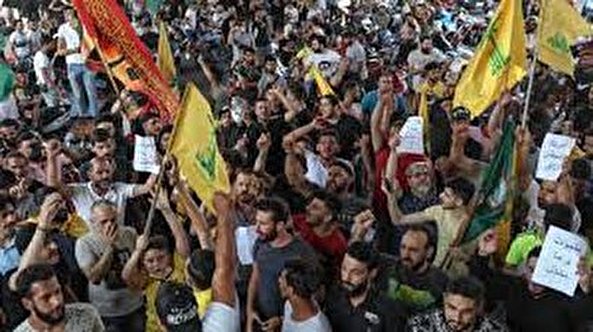 The protesters converged outside the US embassy in the Awkar neighborhood of Beirut on Friday, waving Hezbollah flags and chanting slogans in support of Hezbollah and against US policies in the Middle East region.

The participants burnt US flags and mock-up dollar bills, calling the United States the “mother of terrorism.”

Protesters hurled stones at riot police near the embassy, from which they were separated by layers of barbed wire.

Some demonstrators sought to remove the wire, at which point they were sprayed with water cannons. The riot police eventually escorted the crowd away from the embassy area.

This is the second anti-US protest in Beirut and its suburbs this week.

Shea was already summoned for a meeting with Foreign Minister Nassif Hitti.

In an interview with Saudi-owned al-Hadath television news network late last month, Shea had said Washington has “great concerns” over Hezbollah’s role in the Lebanese government.

Lebanese President Michel Aoun also condemned the US envoy’s anti-Hezbollah criticism, stating that Washington is continuously meddling in the internal affairs of the country.

“The Americans are directly interfering in the Lebanese domestic affairs; and this is unacceptable,” Aoun said in an exclusive interview with Beirut-based and Arabic-language al-Mayadeen television news network on June 28.

US envoy holds lengthy talks with PM Diab over Syria

Also on Friday, the US ambassador to Lebanon held talks with Prime Minister Hassan Diab at the Grand Serail in downtown Beirut.