Fire, explosion reported on US ship at San Diego naval base

Monday, 13 July 2020_Fire and an ensuing explosion have been reported on a ship at the US Naval base in San Diego. 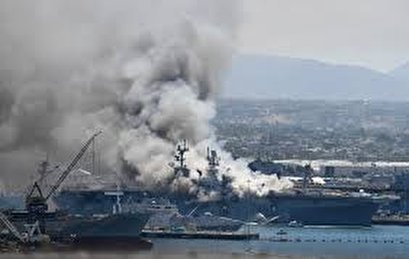 It was not immediately clear what caused Sunday’s blaze on the Bonhomme Richard, an amphibious assault ship and light aircraft carrier.

According to Krishna Jackson, a Navy spokeswoman, the ship had been docked for scheduled maintenance between deployments.

She suggested that it was unlikely for a docked ship to normally have large artillery onboard.

There were, meanwhile, indications that the ship could continue burning for days.

When the fire was reported around 8:30 am local time, some 160 sailors were said to be aboard the ship, which normally carries a crew of roughly 1,000.