Commander of Iran's Basij (volunteer) Force Brigadier General Mohammad Reza Naqdi announced preparedness of his forces to fight against the Zionist regime in the Palestinian territories Fars news reported..
"At present, the Iranian Basijis are ready for Jihad in the Palestinian fronts and are waiting for the Supreme Leader's order and are impatiently waiting for that moment," Naqdi told reporters in North Khorassan province on the sidelines of his participation in the International Quds Day rallies on Friday. 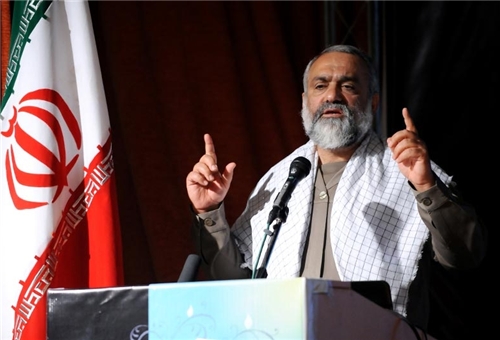 Stressing that 40mln dedicated Muslims are ready to move to Quds, he said, "The Muslim nations no more suffice to the Quds Day rallies and see it as just a symbolic move" meaning that they want more action.
Naqdi underlined that Iran considers supporting and defending the defenseless Palestinian people as its responsibility.
Millions of people took part in the International Quds Day rallies in solidarity with the oppressed Palestinian people today.
The International Quds Day is an annual event opposing Israel's occupation of Beitul-Muqaddas. Anti-Zionist rallies and demonstrations are held on the last Friday of Ramadan in Muslim and Arab countries around the world, specially in Iran.
The Iranian demonstrators in Tehran and hundreds of other Iranian cities in a resolution condemned the Zionist regime's massacre of the people in Gaza, and supported Palestinians' resistance for liberating their territories from the Israeli occupation.
"We as the fasting and revolutionary people of Iran assume the freedom of the holy Quds and the freedom of the oppressed and defenseless Palestinian people from the hands of the brutal and fake Zionist regime as the exhalted cause of the Islamic Revolution and the decisive strategy of Imam Khomeini and his righteous successor Supreme Leader of the Islamic Revolution (Ayatollah Seyed Ali Khamenei) for the Muslim world and spare no material and spiritual support for the materialization of this holy cause," the resolution said on Friday.
The Iranian demonstrators condemned the savage attacks of the Zionists against the Palestinian Muslims, specially the women and children, as "war crime and genocide", and called on the international human rights organizations, the members of the Organization of the Islamic Cooperation (OIC) and other international bodies to take practical steps to punish the Israeli leaders.
The resolution also deplored the crimes committed by the Islamic State of Iraq and the Levant (ISIL) and other terrorist Takfiri groups' crimes in Iraq and Syria as the US, Zionist regime and the reactionary regional states' proxy war to weaken the resistance front.
The Iranian demonstrators described unity and solidarity among the Palestinian groups against the Zionist regime as one of the most important necessities for the freedom of the holy Quds, and expressed pleasure in the recent agreements between Fatah and Hamas, calling on them to keep vigilant and don’t allow the enemies of the Palestinian nation to waste the opportunity for the strengthening of the resistance front against the Zionists.
"We as the integrated and united Iranian nation, consider the cause of freedom of the holy Quds and all-out support for the Palestinian Islamic resistance and efforts to annihilate the cancerous tumor, Israel, still the first priority of the Muslim world," the resolution underlined.
The demonstrators also stressed that controlling the regional crises, including the ISIL and other terrorist groups' conspiracy in Syria and Iraq will pave the grounds for the collapse of the Zionist regime, and said the Palestinian refugees should return to their territories and the Palestinian nation should participate in a free referendum to decide their fate.
They strongly condemned the Judization of the occupied Palestinian territories and efforts to destroy Palestine's national and historical identity in the light of the international community and certain Arab-Islamic governments' silence.
The Iranian demonstrators lauded the religious leaders and influential figures' role in foiling the Zionist regime's plots to create rift among Muslims, and asked the Islamic Ummah to become united and integrated and strengthen the anti-violence front to defuse the enemies' plots and strategies.
The resolution also voiced support for the popular revolutions in the region, and condemned the Bahraini and Saudi regimes' crimes against their people and the savage acts against the people in Myanmar, Pakistan, Afghanistan and Iraq, and termed them as a US plot to meet the goals and interests of the enemies of Muslims.
The Iranian demonstrators also pointed to the ongoing nuclear talks between Iran and the world powers, and warned the enemies of Iran, specially the US and its regional and trans-regional allies to give up their confidence-destroying  approaches and behaviors which are threatening the inalienable and legal rights of the Iranian nation.
"They should know that the Iranian government and nation under the guidance of Supreme Leader of the Islamic Revolution still thinks of wise and fair interaction with the world and under the guidelines of the Leader beside the powerful and brave Armed Forces will give a tough, destructive and regretting response to any threat and aggression against the country's territorial integrity, interests and national security," the resolution underscored.
Share to
Tags
Basiji ، Iran ، Israel ، Naqdi
Your Comment