PMU official: US only concerned about looting Iraqi oil, never thinks about nation

Saturday, 01 August 2020_An official from Iraq’s Popular Mobilization Forces or Hashd al-Sha’abi says Washington only seeks to loot the Arab country’s crude oil, stressing that US officials are unconcerned about the Iraqi nation and their woes. 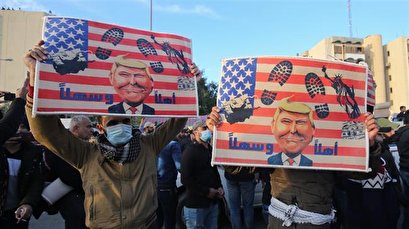 “The United States simply intends to exploit the needs of our people to achieve its own goals,” Iraq's al-Ahad television network quoted Qais al-Khazali, leader of Asa'ib Ahl al-Haq, which is part of the PMU, as saying in a televised speech on the occasion of Eid al-Adha (Feast of Sacrifice) on Friday.

He stressed that US President Donald Trump is only thinking about how to take control of Iraqi oil fields and how to secure agreements in the field of electricity with the Iraqi government.

Khazali then called upon the incumbent Baghdad government to quickly implement the framework agreement that the previous administration signed last year with German industrial conglomerate Siemens to upgrade the electricity grid of the power-strapped country.

The Trump administration is pushing for a deal between Washington, Baghdad and six Persian Gulf states to connect Iraq's nationwide power grid to that of the Persian Gulf Cooperation Council (GCC).

“Can the government not succumb to US pressure?” al-Khazali asked, underlining that the completion of the agreement is “a sovereign decision.”

Iraq relies on Iran for trade and natural gas that generates as much as 45% of its electricity. Iran transmits another 1,200 megawatts directly, making itself an indispensable energy source for its Arab neighbor, but the United States is trying to pry Baghdad away from Tehran’s orbit.

The US has been enlisting its companies and allies such as Saudi Arabia to replace Iran as Iraq’s source of energy.

“Some media outlets that receive money from abroad have driven the youth to pessimism and despair. They openly encourage the conflict. There are dangerous plans in order to profit from protests,” he pointed out.

People have recently taken to the streets of Iraq's capital and other cities in demonstrations against corruption, unemployment and poor public services.