Monday, 03 August 2020_Lewis Hamilton has claimed a record seventh Silverstone win of his career in Formula 1 of 2020 British Grand Prix despite suffering a puncture on the last lap. 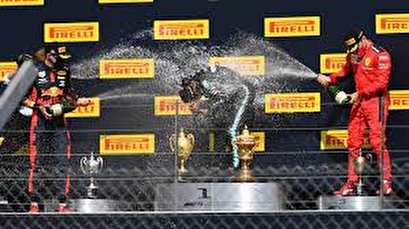 The Mercedes driver led from lights to flag and completed the 52-lap race in one hour, 28 minutes and 1.283 seconds, posting his 87th career victory.

The Brit is now 4 wins shy of Michael Schumacher's record of 91. Hamilton was nearly 6 seconds ahead of Red Bull’s Max Verstappen who inherited second after Valtteri Bottas fell victim to a late puncture.

And Ferrari’s Charles Leclerc took third place. In the drivers' championship, Hamilton leads with 88 points after four races, 30 above Bottas while Verstappen sits 3rd with 52 points.