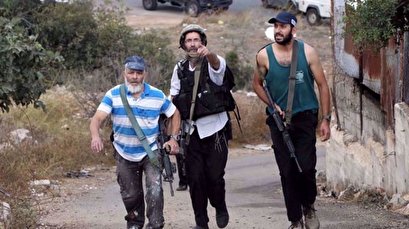 Palestinian media reports on Sunday said that the latest act of violence took place in Jibiya village, north of Palestinian city of Ramallah, on Saturday afternoon.

The hard-line settlers pointed guns at and physically assaulted Sheikh Mohamed, his children and wife as well as other families who were having a picnic in the area.

The eyewitnesses said the settlers robbed data-x-items from the families and snatched their cell phones and other belongings away.

Israeli settlers have pressed ahead with their acts of vandalism and violence, known as price tag attacks, against Palestinians and their property as well as Muslim holy sites.

According to human rights groups, incidents of sabotage and violence by extremist settlers against Palestinians and their property are a daily occurrence throughout the occupied West Bank.

The Israeli settlers also launch attacks on Palestinian homes, set their cars on fire, vandalized their property, and uproot their olive trees and other crops as well as sealing their livestock.

The Israeli rights group B’Tselem earlier this year said the Israeli settlers had noticeably escalated attacks against Palestinians in the occupied West Bank in April despite restriction of movement and lockdowns due to the COVID-19 pandemic.