Tuesday, 04 August 2020_A North Carolina group of activists are outraged after a black bear was seen wandering with a political sticker on its collar. 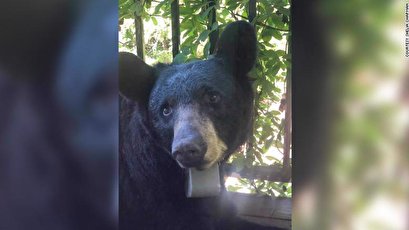 The group, Help Asheville Bears (HAB), is offering a $5,000 reward to anyone who is able to find out who placed the "Trump 2020' on the bear's collar.

Sheila Chapman tells ABC-affiliate WLOS bear sightings are fairly common in her area. But she noticed something different about this bear, it had a colorful sticker on its collar.

"We have so many places in this world to put stickers and express our political views," Chapman says. "Using a wild animal for that is cruel and inhuman. It's not OK."

After spotting the bear, Chapman reached out to HAB. A spokesperson for the organization says this was not the first time a bear was spotted in Asheville with a political sticker on its collar.