India imposes curfew in Kashmir ahead of anniversary of autonomy revocation

Tuesday, 04 August 2020_India has imposed a curfew in many parts of the Indian-controlled Kashmir ahead of the first anniversary of New Delhi’s decision to abolish the disputed region’s autonomous status. 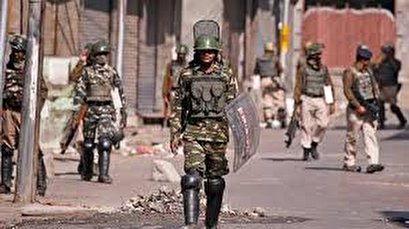 Indian forces patrolled streets in Kashmir’s main city of Srinagar on Tuesday and enforced restrictions on people’s movement after authorities announced the curfew late on Monday.

The curfew will be implemented on Tuesday and Wednesday due to purported intelligence about protest plans by anti-India groups to mark August 5 as “Black Day,” Shahid Iqbal Choudhary, a civil administrator, said in a government order.

On August 5, 2019, Prime Minister Narendra Modi’s Hindu nationalist government announced it was removing the region’s special status. India also announced the division of the state into two territories to be directly ruled from New Delhi.

Following the announcement of the removal of Kashmir’s special status, Indian authorities imposed harsh movement restrictions, made mass arrests, and blocked communication to thwart any protests.

A police officer, who asked not to be named, told AP that tens of young men had been arrested in the last few days over the allegation that they planned to organize protests in the region.

Human Rights Watch on Tuesday denounced India for persisting with “its repression of Kashmiri Muslims,” calling on the authorities to reverse their “abusive policies” in the region.

“Indian government claims that it was determined to improve Kashmiri lives ring hollow one year after the revocation of Jammu and Kashmir’s constitutional status,” Meenakshi Ganguly, the New York-based rights group’s South Asia director, said in a statement on Tuesday.