Wednesday, 05 August 2020_Lebanon’s President Michel Aoun has called for a two-week state of emergency in Beirut following a huge explosion that claimed more than a hundred lives, injured thousands more and sent seismic shockwaves through the capital, with the country’s top defense body describing Beirut as a “disaster-stricken” city. 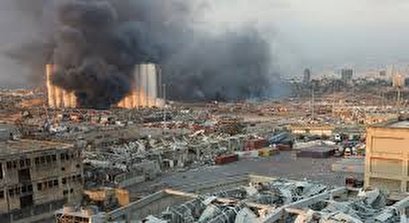 Lebanon’s Supreme Defense Council headed by President Aoun held an emergency meeting at the Baabda presidential palace in the early hours of Wednesday.

Following the session, a statement by the council, read live on television, said Aoun had decided to release 100 billion Lebanese pounds in emergency allocations from the 2020 budget.

The council also recommended that a committee be tasked with investigating the blast and present its findings within five days to mete out the maximum punishment for those responsible.

It further suggested declaring Beirut a “disaster-stricken” city, announcing a two-week state of emergency in the capital and handing over security responsibility to military authorities.

The explosion — the most powerful in Beirut in years — flattened much of the strategic port and left buildings in ruin as a giant cloud of smoke rose above the capital.

Germany’s geosciences center GFZ said the explosion triggered a 3.5 magnitude earthquake, which was also felt as far away as Cyprus over 200 kilometers across the Mediterranean.

The Lebanese Red Cross put the death toll at above 100.

"Until now over 4,000 people have been injured and over 100 have lost their lives. Our teams are still conducting search and rescue operations in the surrounding areas," a statement said Wednesday.

“There are many people missing. People are asking the emergency department about their loved ones and it is difficult to search at night because there is no electricity,” he told Reuters.