Wednesday, 05 August 2020_Lebanon is to put all port officials, who oversaw storage and security since 2014, under house arrest amid suspicions that negligence of the dangers that are posed by storing ammonium nitrate led to the unprecedented blast that hit the capital Beirut earlier. 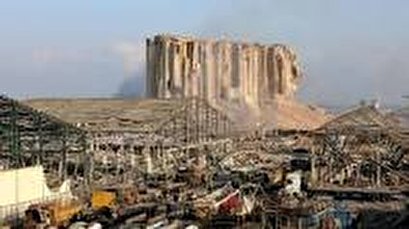 The army will oversee the arrestees until responsibility is determined for the Tuesday explosion, the biggest to ever hit Beirut, in which the country’s main grain silo was destroyed.

The blast has so far claimed at least 113 and wounded 4,000 others, said Health Minister Hamad Hassan.

The powerful explosion that was felt as far away as Cyprus, leveled whole sections of the city, turning successive apartment blocks into masses of debris and twisted metal.

Some 300,000 people have also been displaced from their homes.

The Cabinet also announced a two-week-long state of emergency in Beirut, and asked security forces to ensure no one tampered with blast scene.

The country has pledged a transparent investigation into the incident.

Although, nothing has officially been determined, some media outlets alleged that officials “knew” about the dangers that are posed by storing ammonium nitrate -- that is used in agriculture as a high-nitrogen fertilizer -- but failed to do anything about it.

With destruction of the silo, the nation is now left with less-than-a-month's supply of grain, but enough flour to avoid a crisis, the government says.