Wednesday, 05 August 2020_Iran's Judiciary Chief Ebrahim Raeisi has called on the international community to take action to help lift US sanctions against Lebanon to prevent a humanitarian catastrophe in themthe wake of a recent massive explosion that ravaged the country's capital Beirut. 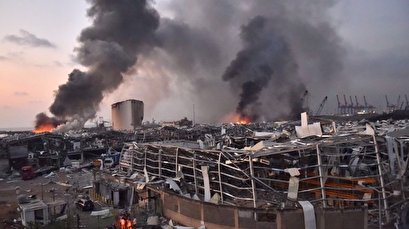 The Iranian official on Wednesday offered his condolences to the Lebanese government and nation over the tragic explosion in Beirut, and said the damage to an important part of Beirut's economic infrastructure and its consequences have doubled the tragedy for the people of the country.

The necessary action today, while maintaining national coherence and vigilance against acts by enemies of the Lebanese nation and government aimed at invoking sedition and division, is to immediately address the basic needs of the Lebanese people, whose supply has been disrupted as a result of this incident, Raeisi added.

He said this painful incident took place at a time when the wounds caused by the Israeli occupation and its repeated acts of aggressions against the Lebanese people have not yet healed, coupled with Washington's brutal sanctions against Beirut.

"Considering the cruel and inhumane sanctions imposed by the criminal US regime against the Lebanese people in recent months, which constitute a serious obstacle to addressing the essential needs of the Lebanese people, efforts to immediately lift these sanctions in order to prevent a humanitarian catastrophe must be on the agenda of the governments having friendly ties with Lebanon as well as the international community," the Iranian Judiciary chief noted.

He added that the Iranian Judiciary's High Council for Human Rights will put on the agenda taking legal action to remove these pressures and defend the rights of the Lebanese people.