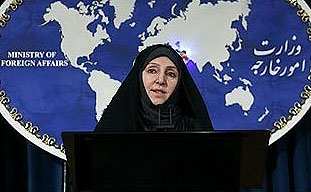 The Spokeswoman of Iran’s Ministry of Foreign Affairs said Monday that the ministry is going to host a one-day meeting next week that will be attended by the Palestine committee members of the Non-aligned Movement.

Marzieh Afgham stated "During a meeting by the ambassadors of the Palestine committee members of the NAM held in UN headquarters in New York with Iran’s initiative and headed by the acting-head of Iran’s permanent embassy to the UN, it was decided that a one-day meeting be held in Tehran hosted by the Islamic Republic of Iran and attended by the foreign ministers of the committee members as well as some other activists on the movement to address the latest state of Gaza and find ways to deal with the crisis and to reduce the human suffering of the people of Gaza.”

She further pointed out "Following the recent Gaza crisis and Mr. President’s order, as well as Iran’s intensive efforts as the periodical head of the NAM, in the past ten days Iran’s embassy in New York held emergency meetings as planned by Dr. Zarif in order to use the political weight of the NAM and investigate the possible procedures. The Palestine committee convention is also going to be held within the same framework.”