Japan marks 75 years since US nuclear bombing of Hiroshima

Thursday, 06 August 2020_Japan is marking 75 years since the United States dropped a nuclear bomb on Hiroshima, with ceremonies downsized due to the coronavirus pandemic. 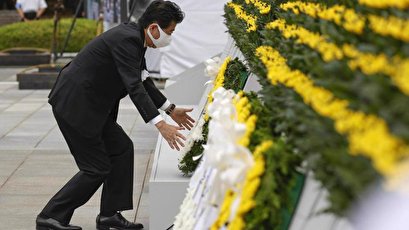 Every year, tens of thousands of people would take part in a solemn and emotional ceremony at the Peace Park in central Hiroshima to honor the victims of the world’s first ever atomic attack and call for world peace.

But due to the coronavirus pandemic, the city decided to hold the ceremony this year with less than one-tenth of the usual attendance.

Other events, including a gathering to float lanterns along the Motoyasu River, were canceled due to a surge in coronavirus infections in parts of the country.

On August 6, 1945, American B-29 bomber Enola Gay dropped its atomic payload over the port city at 8:15 a.m. local time, ultimately killing 140,000 people. The bombing utterly destroyed almost everything within 10 square kilometers in the downtown area. Many died immediately while others succumbed to their injuries or radiation-related illnesses weeks, months, and years later.

In the Thursday ceremony, participants observed a minute’s silence at 8:15 a.m., while the Peace Bell rang.

Only survivors, relatives, and a handful of foreign dignitaries attended the event in the western Japanese city, with chairs spaced far apart and most attendees wearing masks.

Hiroshima Mayor Kazumi Matsui addressed the crowd at the ceremony.

“On August 6, 1945, a single atomic bomb destroyed our city. Rumor at the time had it that ‘nothing will grow here for 75 years,’” Matsui said. “And yet, Hiroshima recovered, becoming a symbol of peace.”

The mayor further said the annual commemoration was “Hiroshima’s mission of calling on people across the world to work towards peace.”

“When the 1918 flu pandemic attacked a century ago, it took tens of millions of lives and terrorized the world because nations fighting World War I were unable to meet the threat together,” Matsui added.

“A subsequent upsurge in nationalism led to World War II and the atomic bombings. We must never allow this painful past to repeat itself. Civil society must reject self-centered nationalism and unite against all threats,” he added.