Thursday, 06 August 2020_Iraqi Prime Minister Mustafa Al-Kadhimi has for the first time met with anti-government protesters in central Baghdad, renewing his pledge to deliver on their rightful demands. 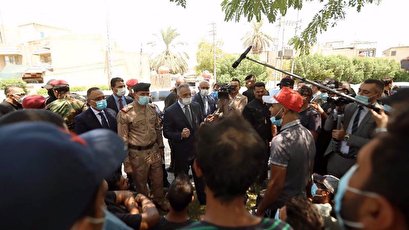 On Wednesday, Kadhimi visited a group of young demonstrators, including college graduates, during a sit-in in the center of Baghdad and listened to their demands and proposals, according to a statement by his office.

The Iraqi prime minister promised to “meet all their rightful demands,” saying that “the government faces cumulative problems, caused by years of mismanagement of the decision makers, and the absence of long-term plans,” the statement said.

Kadhimi described the protesters’ demands as “legitimate” and in line with the country’s constitution and his government’s agenda.

He said that measures taken by the government against corruption and mismanagement would have a positive impact on the overall performance of the country and the government apparatus.

Iraq has been the scene of protests over the past months, with young crowds demanding jobs, services, and urgent action against alleged rampant corruption.

Former Iraqi prime minister Adel Abdul Mahdi stepped down under the pressure of the rallies, which were sometimes marred by deadly violence

Kadhimi, who took office following a political consensus in May, has promised to fulfill key demands of anti-government demonstrators.

Furthermore, Kadhimi has promised dialog with protesters and has requested comprehensive lists of all those who have been killed and wounded throughout the months-long protests in a bid to put those accountable on trial and bring about compensation.

Last week, Kadhimi proposed that parliamentary elections be held next June, a year earlier than scheduled, a key demand of anti-government protesters.