Friday, 07 August 2020_The Civil Defense in Mecca Region in Saudi Arabia says a number of temporary contractor offices have been badly damaged after a blaze broke out inside the courtyard of the centerpiece of a new multibillion-dollar high-speed rail project in the kingdom’s coastal city of Jeddah. 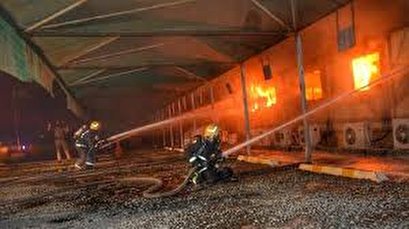 Colonel Muhammad al-Qarni, a spokesman with the civil defense, said the fire originated from makeshift cabins, covering an area of 1,200 square meters in al-Sulaymaniyah neighborhood and very close to the Haramain high-speed rail station.

The spokesman added that firefighters rushed to the station after they were informed about the incident at 7:27 p.m. local time (1627 GMT) on Thursday.

Fire crew finally managed to bring the blaze under control, according to the English-language daily newspaper Saudi Gazette.

The cabins had no employees inside and there were no injuries or casualties, the General Directorate of Saudi Civil Defense wrote in a post published on its official Twitter page. There was no immediate known cause of the fire.

Back on September 29, 2019, a massive fire ripped through the same train station, leaving at least five people injured.

Videos posted on social media at the time showed black plumes of smoke billowing out of the Haramain train station, and helicopters flying over the scene. Online videos showed nearly a dozen people on the roof of the structure.