Over 60 still missing as Lebanon rejects bid to 'dilute truth' 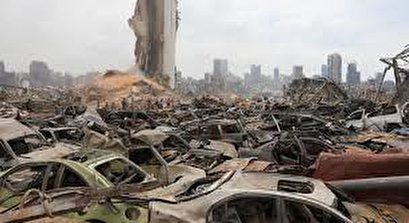 The number of dead is 154, including 25 who have not yet been identified,” the official told AFP on Saturday. “In addition, we have more than 60 people still missing.”

According to Lebanese officials, the explosion of 2,750 tons of ammonium nitrate, a substance used in making fertilizers and explosives, stored in a warehouse at the port in Beirut caused the disaster.

The United Nations said up to 100,000 children are among the 300,000 people made homeless, including many who have been separated from their families.

The explosion has generated a mix of shock and anger in Lebanon and seen French President Emmanuel Macron to make an uninvited visit to the country, prompting comparisons with the country's "colonial" past.

A large supply of confiscated explosive material that had been stored in a warehouse at the city's port for the past six years is suspected to have caused the massive explosion, the biggest to ever hit the Middle East, but investigators have only just started to look into what happened.

On Friday, Lebanese President Michel Aoun dismissed calls for an international probe into the devastating Beirut port chemical explosion that shook the capital, stating that such attempts are meant to “dilute the truth.”

“There is no meaning for any verdict if it takes too long to be issued and the judiciary must be swift, because belated justice is not justice then,” Aoun told a press conference.

He added, “Just like all Lebanese people, I’m angry about the blast that occurred at the port and our goal today is to unveil the truth. No one can push me to commit a mistake, no matter whether we are in a state of war or peace, and no one can prevent me from disclosing facts.”

Aoun noted that “the real consolation [for the Lebanese nation] is the fulfillment of justice. No senior or low-ranking official will enjoy impunity in light of such justice.”

“There are two possible scenarios for what happened: it was either negligence or foreign interference through a missile or bomb,” he said, stressing that he personally asked Macron to provide Lebanese officials with any aerial images that would determine whether there were aircraft or missiles in Lebanon’s airspace before the catastrophic port blast.