Sunday, 09 August 2020_Police in Belarus have briefly detained a prominent campaign official of presidential opposition candidate Svetlana Tikhanovskaya, on the eve of a presidential election in which the country’s long-running strongman Alexander Lukashenko faces the toughest challenge to his rule yet. 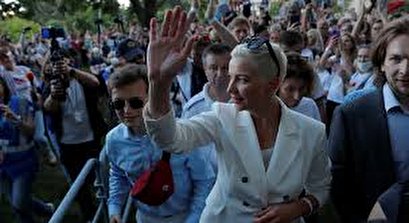 Tikhanovskaya’s campaign team said on Saturday that Maria Kolesnikova had been detained in what police said was a case of mistaken identity, and then released.

Police did not make any statement on her arrest.

Tikhanovskaya poses the greatest challenge yet to Lukashenko, who has ruled the nation for over a quarter of a century.

Tikhanouskaya, 37, who was an English teacher, entered the presidential race after authorities jailed her husband, Sergei Tikhanovsky, a popular blogger who intended to run.

Her rallies have drawn tens of thousands of supporters across the country.

He is also facing criticism over his handling of the coronavirus epidemic and an economic crisis in the country.

President Lukashenko, who is seeking a sixth term, ordered a crackdown on rare and sustained protests against him during which police detained rivals and dissenters.